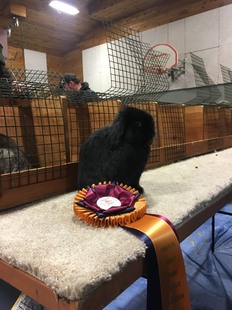 While this Home Page won't have changes, remember to check out my Blog Page. It has some Blackberry Farm "News and Views" and Rabbit Keeping Tips & Ideas to share. If you have Tips & Ideas to share, please email them. Meanwhile, enjoy your rabbits, they are the furry ambassadors of our hearts.
​ 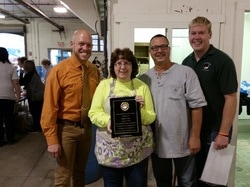 A great honor to be recognized by both peers and the rabbit industry.

A Visit to Blackberry Farm 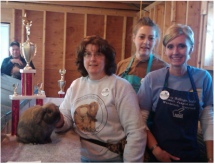 Welcome to Blackberry Farm Rabbitry located in the beautiful State of Maine. I have raised rabbits since 1983 starting with a pair of mixed breed rabbits. I became interested in showing rabbits and progressed to purebred Mini Lops. Then fell in love with the Holland Lop breed in 1985 and raised them ever since.  If you have a pedigree with the prefix "BBF's", that stands for Blackberry Farm and that rabbit was bred here at Blackberry Farm, an ARBA registered rabbitry.
​
This photo is of BBF's Hot Cider winning Reserve In Show (he won a 2nd RIS the following weekend). He also allowed myself (Debbie Vigue) and judges Stacey Sauter, MD and Theresa Christen, WI in the photo.
The Rabbitry
As far as a rabbitry goes, I started out with four outdoor hutches, then an addition of 15 holes on the back of a tool shed, then 21 holes in the horse barn. Raising rabbits during Maine winters can be a hardship and in the case of Holland Lops, non-showable rabbits. Holland Lops are born with their ears up like other rabbits. Around weaning time, the ears drop down. If they are exposed to steadily cold temperatures during this time, they can develop ear control or the ears don't drop down at all. This is nature's physical reaction to the cold as a body naturally keeps blood pumping to the internal organs and away from the extremities. So after many years of babies being born in the cold (bunnysicles), frozen water and frozen fingersicles caring for them and bringing litters into the basement til Spring, we built a heated rabbitry building. Gary's fine thought was that the building would compliment the house and if/when I ever went out of rabbits, he'd have a pretty nice heated work building. Well,,,,,,, 20+ years later, the rabbits still "own" the building.

The result is a 24x32 foot building with a concrete floor and a furnace sitting in the middle of 2 rows of back-to-back 2 tier stackable cages. The furnace is set to just 47 degrees and blows hot air out of four-sided bottom vents. The cages sit on 19 inch high tables so that you can easily get to and see the bunny in the bottom and he, in turn, isn't only always seeing feet. The tables are covered in plastic for protection against what the litter pans and urine guards don't catch (see below). There are also Plexiglass dividers that hang between cages to keep the "Picasso bucks" from decorating each other. A large louver vent in front and back with a fan in each, pulling in fresh air and blowing out the back (see below). Lots of windows and light blue painted walls keep the place bright along with 3 rows of pigtail lights. At the front of the rabbitry is a long front counter with sink and work space with bunny supply storage bins on shelves underneath. Beside this is a recycled chest freezer keeping grain and striped sunflower seeds cool, dry and mold-free (see below).  Overhead of the oil tank is 3 shelves holding nestboxes.

A Rubbermaid cart is an investment but worth it to wheel up and down the aisles to feed and water. Grain, seeds, oatmeal and hay container on top, water dump bucket, trash can, scraper and wire brush on the bottom. The bunnies anticipate their meals when they hear the squeeky wheels coming their way! The back corner has a walk-in shavings storage bin beside a large table to refill litter pans on and store carriers underneath. Water is also piped to the back outside of the building with a frost-free draining faucet. The opposite back corner has a 4 ft. wide door to easily manuever the wheelbarrow in and out. Pans are dumped, hosed, dried in the sun and replenished with fresh shavings. If the weather doesn't cooperate, we can set the wet pans by the furnace vents to dry. We get several pickup truck loads of shavings a year from a local lumber mill, much cheaper than bagged shavings. There is a "hatch" type window to the shavings bin high enough to allow to stand up in the pickup truck bed and shovel shavings in. We do buy a few bags of shavings for the nestboxes. Nestboxes are also hosed and set in the sun to dry and disinfect.

A Little Bit of History

Generally when active in showing rabbits, you become active in clubs. This is how you network with others that understand why you like rabbits. You don't have to explain yourself like you do to non-rabbit folks. The folks that when you say you are going to a rabbit show on Sunday, they say "What? Rabbits? I didn't know you can show them? How many do you have? Oh, my, you have more than one? Bet they are easy to breed!!" The latter really irks anyone who raises a dwarf breed like Holland Lops and Netherlands. You don't want to start in on the genetics of double dwarfs, so you join a club instead! Locally, I belong to Eastern Maine Rabbit Breeders Assoc., Maine State Rabbit Breeders Association, New England Holland Lop Rabbit Club and nationally Holland Lop Rabbitry Specialty Club and American Rabbit Breeders Association. I've been everything from Secretary, Treasurer, President, Awards person, Banquet coordinator, Judge "getter", Show Super and served on other committees. Everyone should do something for their clubs, it lightens the load for all and you make new friends along the way. If you ever complain about how a club does something or how a show is run, join the club and pitch in.

I'm pleased to have placed at HLRSC Nationals Top Ten many times and ARBA Conventions winning Best Fur the first 2 times entered and a Best Opposite Sex Solid with BBF's Tova, a tort junior doe.

The award that mattered most was being inducted into the HLRSC Hall of Fame in 2005. Having your rabbits win awards is nice, being recognized by your peers for your work in this fabulous breed is way above that.